We entered a team into a local charity football tournament at Maidenhead Football ground to raise funds for local charities. We nominated Braywick Heath Nurseries as our chosen charity and raised over £1,400 in donations as well as being awarded an additional £3,000 as the team that raised the most money. Braywick Nurseries is a local organisation that provides employment through horticultural work and therapy for people with disabilities or in need of support.

Members of the Beech Lodge School community including pupils, parents and staff donated Christmas gifts to Maidenhead charity The Brett Foundation. Following an assembly given by Sue Brett, founder of the charity that supports homeless and needy families, we asked pupils to donate a gift to a child of the same age and gender. Elder Class pupils Sam, James and Dom took the presents down to the shelter and all proceeds from the sales of items in our Christmas Shop were donated to the Brett Foundation.
We are also painting a mural using the theme of ‘Hope’ to be installed in the homeless shelter and are looking forward to some of our older pupils volunteering in the shelter from time to time. 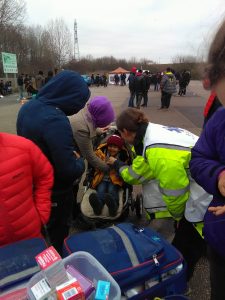 Willow Class looked in depth at the refugee crisis and spoke via Skype to Selina Larsen of the refugee council and ‘Saki’ a lady from Sri Lanka who fled because of life threatening circumstances surrounding the civil war there. They also spoke to Josh Thorn of Inspire Worldwide who provides first aid support to refugees in Calais and Dunkirk with the charity F.A.S.T. (First Aid Supplies Team).
F.A.S.T is an organisation made up of health professionals from all over the world working across Calais and Dunkirk helping and assisting people forced from their homes by violence, persecution, and poverty. F.A.S.T provides first aid, first aid kits, and assist patients to access appropriate (emergency) healthcare. Many people very kindly donate clothing and food to the refugee crisis however first aid supplies are in short supply. Refugees often do not go to hospital due to overcrowding and the risk of deportation back to the country and atrocities they have fled. The Beech Lodge community donated much needed healthcare items to the charity